Twinning for the Armenian Research Infrastructure on Cancer Research 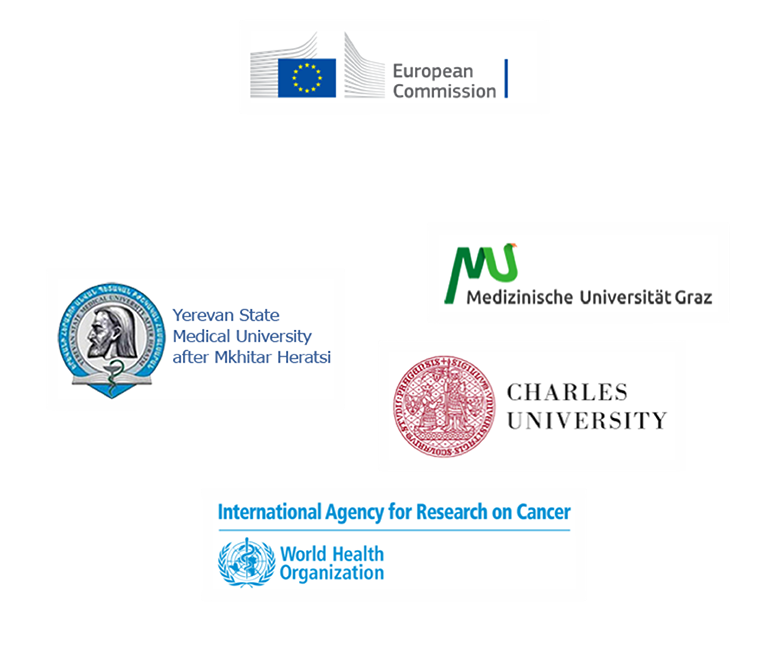 Twinning for the Armenian Research Infrastructure on Cancer Research (ARICE) aims to increase the research infrastructure capacities in the field of cancer research in Armenia, through integrating a robust pathology and genomci background with state-of-the-art biobanking to a research-ready data structure. This will be achieved by establishing close cooperation with the leading expert-institutions in the field (Medical University Graz, Charles University and IARC) as well as by facilitating spread of the competences at institutional, national and regional levels. Cancer research infrastructure has been chosen as the focus because Armenia has a very high incidence and mortality of cancers, as well as a very high prevalence (according to incidence) among rare malignant diseases, while it underperforms in cancer research when compared to the EU average.

ARICE will ensure cancer research infrastructure gets appropriate attention in order to support further local research in Armenia and in the wider Caucasus region. New scientific developments in the field of cancer prevention, particularly in biomarker research and large population-based investigations are in place to facilitate success in research in this field. The ARICE project is going to be an important step for reaching the set goals both efficiently and effectively. The competences acquired in this field during the project realization will be easily transferable to other fields of research related to medicine, biology and medical ethics, health-economics and biostatistics. Involvement of researchers from multiple specialties (physicians of different disciplines, biologists, data management specialists) hosted by the Yerevan State Medical University (YSMU) will ensure this smooth transfer of expertise.

This project aims at significantly strengthening the scientific and technological capacity of the linked institutions with a principal focus on the Yerevan State Medical University (YSMU), Armenia. The aim would be to enhance the YSMU research capacity in the field of infrastructure development for clinical genetic research, in particular targeting the collection and use of biological material, and the data integration for downstream analyses in relation to chronic, non-communicable diseases such as cancer. This will be achieved by networking the excellence from three leading research-intensive expert centres: the Medical University of Graz (Med Uni Graz), Austria; the Charles University (CU), Czech Republic; and the International Agency for Research on Cancer, World Health Organization (IARC/WHO).

In terms of excellence, currently Armenia is one the lowest performing countries when compared to the EU. According the EC/JRC Scientific and Policy Report based on the composite indicator evaluation for scientific and technological research excellence this indicator for Armenia has been estimated at 20.7, while the average EU28 is 40.5.1 Armenia has one of the lowest R&D intensities,2 as well as one of the lowest numbers of scientific publications as compared to the EU average. The national innovation system is overshadowed by low scientific performance, even when compared against similar benchmarked countries. Low performance indicators also characterize the participation activity or success rates in EU research programs such as FP7 and H2020.3

The major objectives to be fulfilled in the ARICE project over three years will be divided between Strategic objectives, Scientific capacity objectives, and Institutional policy objectives.

The general approach of the ARICE project is networking for excellence through knowledge transfer and exchange of the best available practice between YSMU and the leading excellence centres. The collaboration that will be developed during the project is built on previous initiatives and results, and provides mutual understanding and trust; in the future this is going to create a strong consortium in the field of cancer research. This consortium is going to extend and provide further added-value in the common EU research area and the near-EU region.

To achieve the expected excellence, transfer of the theoretical knowledge will be directly combined with acquisition of practice and implementation skills under the mentoring of expert institutions; this will be based on the previous knowledge and results of analysis being conducted during the initial phase of the project. To achieve ARICE’s objectives, a 36-month work plan has been designed based on regular and close collaboration between all the Consortium members. The project is built from 7 closely interrelated work packages (WP).